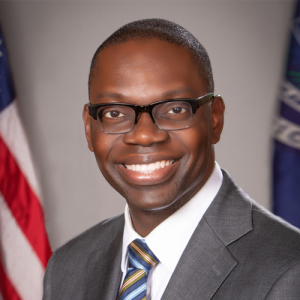 Lt. Governor Garlin Gilchrist has dedicated his career to fixing problems for hardworking families. From spearheading campaigns for equality and justice to harnessing technology to solve everyday problems for Detroiters, his focus has consistently remained on serving the public by getting things done.

During his time in Seattle, Gilchrist served as Social Media Manager for the 2008 Obama campaign in Washington, where he helped launch a national text message program to recruit volunteers. He later served as the first Director of New Media at the Center for Community Change in Washington, D.C., and spent three years as National Campaign Director at MoveOn.org, where he spearheaded equity and justice campaigns, including fighting to expand Medicaid in states with Republican governors, like Michigan.

This eventually led to his serving as the first ever Director of Innovation & Emerging Technology for the city of Detroit, where he used public data and technology to address every day concerns the community was facing – including an app to report issues such as broken fire hydrants, potholes and broken street lights. This mindset of harnessing technology to solve problems will play a critical role in finding solutions to improve the lives of people across the state.

A native of Detroit, Lt. Governor Gilchrist’s parents are proud lifelong Detroiters. His mother worked at General Motors for 32 years and his father worked in defense contract management for the Department of Defense. His family was active in the community, including serving in leadership roles within their various neighborhood associations, as well as the church. Lt. Governor Gilchrist began speaking at Dexter Avenue Baptist Church in Detroit at age four, and later honed his skills under Dr. Frederick G. Sampson at Tabernacle Missionary Baptist Church.

Lt. Governor Garlin Gilchrist and his wife, Ellen, currently reside in Detroit where they are raising their twins, Emily and Garlin III, and newborn daughter, Ruby.