Your Plan, Your Pace: The path isn't always linear

Keynote
Dr. Bill Pink, President of Grand Rapids Community College, and educator for over 25 years, will keynote the conference, inspiring young professionals to design a path for personal and professional growth, empowered with the knowledge that their evolution as young leaders won’t always be linear.
YPCC 2018
Presented By: 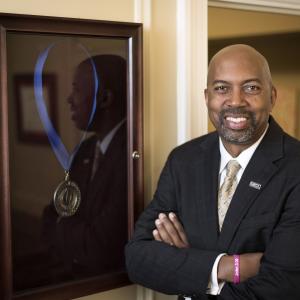 Dr. Pink has been an educator for over 25 years, and while Abilene, Texas is his hometown, Dr. Pink lived in Oklahoma City for 18 years prior to making Grand Rapids home. He has taught and/or coached in Oklahoma, Nebraska, and Oregon. He was a successful college student-athlete as a basketball player, earning awards for his athletic and academic achievements, including a 2016 induction into the York College Athletic Hall of Fame.

Dr. Pink has an Associate’s Degree from York College, Nebraska, a Bachelor’s from Oklahoma Christian University, a Master’s from the University of Central Oklahoma, and a Doctorate from the University of Oklahoma. Dr. Pink contributes to his community through a variety of ways, including board service for Goodwill of Greater Grand Rapids, the Boys and Girls Clubs of Grand Rapids, The Right Place, and The Employers’ Association of Grand Rapids. Dr. Pink also serves as a board member of the Spectrum Health Hospitals Group, the United Way of West Michigan, and West MichiganWorks, the workforce development agency for seven counties in West Michigan.

Dr. Pink is also involved in governance at regional and national levels, his most recent appointment being the Board of Trustees for the Higher Learning Commission (the regional accreditor for colleges and universities across 19 states). He also serves as a commissioner for the Midwestern Higher Education Compact, as well as a board member for the National Council for Workforce Education. In January of 2016, Dr. Pink completed a four-year appointment as a member of the National Selection Committee for the National Merit Scholarship Council. He is also a former national conference co-chair for Dream Deferred: The Future of African-American Education. Dr. Pink is a sought after public speaker, and has accumulated numerous invitations to speak at events across the U.S. His topics are usually associated with diversity, leadership, career and workforce development, and faith-based presentations. Aside from being a teacher-educator, Dr. Pink teaches public speaking courses as well as athletic administration courses at the undergraduate and graduate levels.

Along with a daily workout regimen, Dr. Pink enjoys golfing, fishing, and spending time with his family. His wife is Lori, and their two children are Lance and Lydia. Lori, a Michigan native, is a retiree of the US Air Force Reserve. Lance, who is married to his wife Kayla, is a member of the United States Marine Corps, and Dr. Pink’s daughter, Lydia, is a sophomore in high school.