Candace will inspire young professionals to design a path for personal and professional growth, empowered with the knowledge that change is constant and brings many opportunities for making impact. In addition to the keynote, participants will have the opportunity to engage in small break-out sessions with local leaders focusing on building skill sets, networks and pathways to making the change they seek. 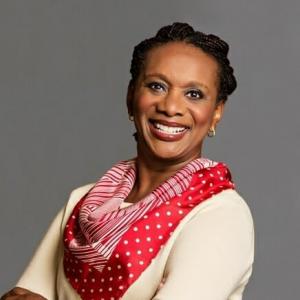 “Amway, in partnership with its business owners, helps people around the world achieve their potential through business ownership. We have helped millions of entrepreneurs go into business for themselves, but not by themselves. That’s the power of the Amway business.”

Prior to Amway, Matthews served as president of SoftSheen-Carson, Consumer Products Division of L’Oreal USA. In this role, she oversaw all company operations, including the merger of the L’Oreal’s SoftSheen and Carson businesses.

Matthews received a Bachelor of Science degree in metallurgical engineering and administrative and management science from Carnegie Mellon University. She also earned a Master of Business Administration degree from Stanford University.

Matthews is a member of the Executive Leadership Council and serves on the boards of BIC, Economic Club of Grand Rapids, Fifth Third Bank – Western Michigan, Figure Skating in Harlem and Detroit and Spectrum Health Foundation. She served previously on the boards of Popeyes Louisiana Kitchen, Frederik Meijer Gardens & Sculpture Park and U.S. Dream Academy. Matthews is also a former member of the board of trustees at Carnegie Mellon University and previously served on the Stanford University Graduate School of Business Advisory Council.

Matthews was named to the Black Enterprise magazine’s 2017 and 2018 lists of the “Most Powerful Women in Business.” In addition, she was named one of the “20 Most Influential Women in Direct Selling” by the Direct Selling News in 2012, 2013 and 2014. Matthews received the Stanford Graduate School of Business “Alumni Tapestry Award” and the Café Mocha “Game Changer Award,” both in 2014. Among the many other awards throughout her career, Matthews received the “CEW Achiever Award” in 2007 and, most notably, was named the Black Enterprise magazine “Corporate Executive of the Year” in 2009.